I’m not sure what sparked my memory, but I recently found myself thinking about Playmobil’s Victorian house. I coveted this toy playhouse as a child, drooling over the dormer windows and old-world feel on the glossy pages of the Playmobil catalog and hoping my parents would surprise me for Christmas.

Unfortunately, the most I received was a few pieces of the kitchen. In fact, I had this exact set, which I found on ebay, down to the broom stand. I guess the playmo-people could imagine a roof over their head and walls. Not that I’m bitter. Careful, lady, if it rains you’ll have a soggy turkey.

Here’s 30 minute video of the Victorian house, if you need a virtual tour. I dig the sweet ride, guys. Although I feel like your lack of knees and elbows make driving incredibly awkward.

My brother, on the other hand, was gifted both the Playmobil Knights Castle and Pirate Ship. A bit of a slap in the face, really. My barbies and Disney figurines invaded both, though, in retaliation.

In 1974 the first Playmobil toys were displayed at the International Toy Fair in Nuremberg, according to Wikipedia. Hans Beck spent three years inventing the simple figurines, giving them just enough mobility without making them complex. A year after their Nuremberg exhibition, Playmobil was selling around the world. Three types of figures were originally sold: knight, Native American, and construction worker.

Playmobil is based in Zirndorf, Germany and the toys are produced at the Playmobil Factory in Malta, a small country south of Italy.

Oddly, Playmobil has made some questionable character choices through the years, walking into some gray areas on the spectrum of political correctness. At some point, Playmobil proposed having a Chinese railway worker in their Western town, but decided against manufacturing the figure. The company has always produced characters of all walks of life across many career fields, even one of their first sets were construction workers, which seems a slightly odd choice, though maybe not as bad as the Indian produced along side it.

If children want to practice profiling, they can play with the Police and Tramp set.

Or if some radioactive material happens to be lying around, they can send in the hazmat crew. I kind of love this one, actually. 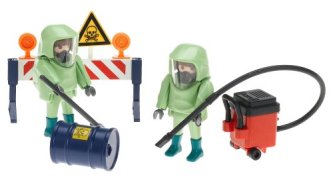 Then there’s the girl on the website with the removable skirt. Why? From what I can tell she only has one outfit. Is that supposed to be a bathing suit underneath? Scratching my head at this one, Playmobil. 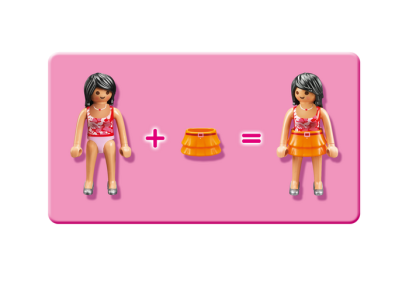 Perusing Playmobil’s website, I found that today the toy manufacturer has wide variety of themes, from fairies to pirates to hockey to family camping. Basically they have a little something for everyone, including XXL figures. Really taking it to the next level. If I were a kid now, I think I’d go for their “Blast off into space!” theme.